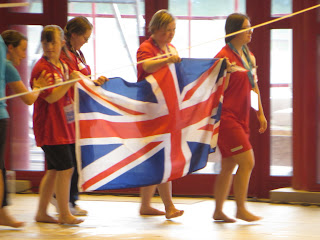 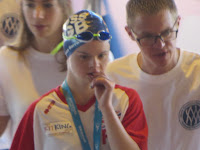 There were some great swims in the morning, notably the 800m freestyle swum by Caroline who was the only British girl in the race. Having to count down 32 lengths, knowing how to pace yourself, just keeping going for that length of swim is a tall order. She was up against Jennifer Higgins from South Africa who holds the world record so it was always going to be tough. Caroline held her own, out in the front right from the start. We all wondered, not least her father, if she had not peaked too soon and gasped as she hesitated with two lengths to go. As she did a flip turn on the final length Jennifer pulled up and took first. The gold still went to Caroline though as Jennifer is South African. It was difficult to contain her father when later on in the afternoon she stood on the podium and we sang God Save the Queen. 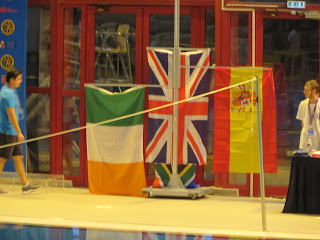 The medals continued throughout the afternoon, 11 in total, way out in front of the other nations, surely we must be top of the table at the moment. But as our coaches continually stressed, no room for complacency in this game.

The final two races were a treat. Relays are always fun, this one didn't let us down.The Brits had both a men's and women's team in the 50m medley. The girls kicked off with Kathryn, followed by Holly. Midway through the race we had all resigned ourselves to the fact that we were not going
to get a medal. Third off the block was Florence with 50m of fly, she did quite well at catching up and our hopes were beginning to rise and we thought perhaps a bronze was possible. Then Caroline, still recovering from her 800m swim of the morning, flew into the pool and stormed down to the other end and back again to narrowly, very narrowly, give us a bronze medal. Surely swimmer of the day. 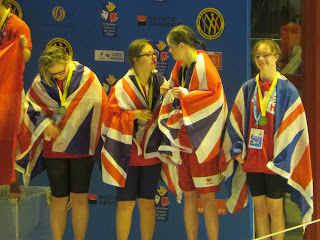