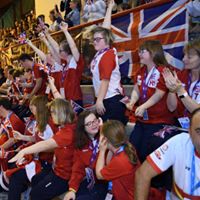 A well earned day of rest after two days competing was well received by all. Various groups went in their different directions. Some to the Eiffel Tower, some the Bateaux Mouches, some just an amble down the Champs-Elysees
We all returned to the hotel in good time to eat and get some rest before day 3 of the competition started. The swimmers .went to bed, refreshed and ready to perform to their best the following day.

As our coaches say, however, no room for complacency in this game.

The presenter from the World Service had just started reading the news. Sir Michael Fallon had resigned, Twitter and Facebook were being held accountable for feeding fake news to millions of Americans during the past elections. Suddenly a strange noise, in fact rather a loud noise could be heard coming from the bathroom and it didn't stop. It soon transpired after inspection that this was indeed, what I think most people were no doubt thinking, a fire alarm.

Out we went in various degrees of dress and undress and gathered in the foyer. It was pretty obvious from the start, that this was a false alarm but for many of the swimmers it was very frightening. At 2.44 am however the alarm had stopped and we were back in our beds, struggling to return to the arms of Morpheus but resigned that we would eventually manage to.

Just as the now all too familiar headlines for the 3.00 am news was broadcast, the alarm once again went off. Reluctantly we returned to the foyer. It was unlikely that it was a real fire but wary of the fact that you can never be sure and for many of us with Grenfell Tower fresh in our minds we thought best to evacuate once more. After various Heath Robinson attempts to fix the alarm (the glass had been broken) sellotape one of them, the noise blissfully ceased and by 3.10 am we were back in bed. Was this a plan to knock us off the top of the medals table or was it just bad luck? I think the latter but the next morning's greetings went no longer 'did you sleep well?' but 'did you sleep at all?'

By the time the warm-up was over the swimmers had put it all behind them. Day 1 had delivered 11 medals, day 2 twelve, surely day 3 would give us 13?

It was the 100m men's freestyle that gave us the most entertainment. Heat 1 saw Harry Humphries, just 18 and new to the squad, come in with an 18 second PB, with a time of 1:31.42. Could that be possible? Apparently, it was?

Heat 2 saw Jack, Thomas, Will and Chris swim together. The start was delayed as the Estonian swimmer was not wearing a cap (pool rules) and delayed even further when once the cap had been found they were unable to get it over the swimmer's head. Once again we thanked Tracey and Terry, our poolside helpers, who remain constantly at the beck and call of our swimmers, attentive and efficient to the last.

Finally, they were off, Jack came in first and Will, third.

Heat 3 had Will (Lake) and a Jake (Vickers) swimming against each other. It all got off to a dramatic false start. As the whistle blew two of the swimmers didn't go in at all and the rest dived in prematurely. The rope went down and out they got ready to give it another go. It was looking like one of those races, chaotic as an adjective came to mind. Those spectators watching in the terraces who knew the rules began to question the organisation, those who didn't and I speak for myself, waited resigned that it would all be sorted out eventually. Ten minutes passed, the swimmers were still waiting for the race to restart and were beginning to get cold. Finally, the whistle blew and in they went for the second time. Thankfully no false start this time. A close swim for all saw Will knock 7 seconds off his PB and come in first.

Heat four saw Mark Holmes and Stephen Boyce. Would Stephen repeat his extraordinary performance of day 2? Finally, after a close race by both, Mark came in third and Stephen second and both with PBS. We were beginning to think that a fire alarm every evening might be a good thing.

There were two more heats to go. The first of the final two had Billy and Andy in it. Apart from another missing cap – but this was sorted pretty quickly this time – the race pulled off smoothly with Billy coming first.

The final race saw Will Reed and Zac Lacey up against each other. They both swam magnificently. We were going to have a treat that afternoon in the finals.

Morning relays over we went back to rest before returning for the afternoon. A good proportion of the British team were swimming, be it in the finals or relays. It was looking like a given that we would bag a few more medals but would it be the magic number of 13?

It began with the medal ceremonies and away from the British camp the Irish were celebrating their first gold for their 1500 m swimmer. She just couldn't control herself as the national anthem played out. Tears were rolling down her cheeks. Kosovo, with only one swimmer in their team, got the silver. 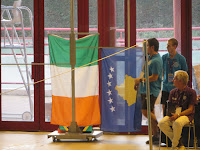 The afternoon continued as had the previous two at the championships. Ali Reed, fresh from London, had joined us the previous day and added voice to the stands. The Marseillaise was sung loud and clear by the French supporters whenever they won a gold and the God Save the Queen even louder by the Brits.

Those of the team not swimming stuck by their mates down at the poolside. When their energy flagged as the afternoon wore on they were jollied along by Terry and Tracey and the coaches. The camaraderie and good spirits were infectious and 100 % genuine. 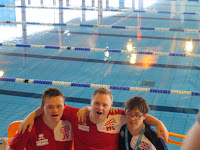 The day's events ended with the 100m women's and men's freestyle relays and medals in each. A fantastic haul of 9 medals, not quite the 13 wished for but pretty good all the same. 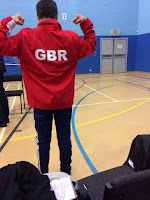