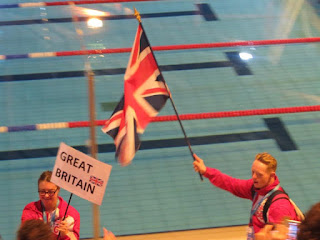 It was once again a beautiful day. We had been blessed with fantastic weather for all four days of the championships and regardless of what people say it does make a difference. The swimmers had a spring in their steps, keen to build on the successes of the previous three days.

The morning opened with the same ritual of officials entering the pool to rapturous applause and thanks and appreciation from the organisers. It had been a great competition so far and the final day was looking promising.

Race one of the day was the women's 400m freestyle. Two heats with GB girls in each. Heat one had Helen Sullivan in lane 4. She led from the start but it was a tall order to maintain her position for 16 lengths. Halfway through she hesitated at the turn thinking she had finished. Loud shouting and encouragement from the officials and spectators alike and she continued on her way still managing to maintain her lead. Despite hesitating at each subsequent turn and with repeated ''No, Holly, go on'' from the crowds, she still managed to come in first knocking 14 seconds off her entry time and with a PB of 8:10.47. 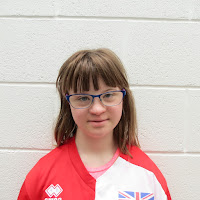 Medina Surdulli, the only swimmer from Kosovo swimming next to her, had the opposite problem. Holly wanted to stop too soon, Medina couldn't be stopped soon enough.  With horror, we watched from the terraces as the official whipped off his belt with what we thought was the intention of catching her attention by hitting the water. Would he lose his trousers we wondered and would be treated with a front row viewing of finest French underwear? Fortunately for all involved, Medina finally realised the race was over and the official retained his dignity!

Heat two had Florence and Kathryn Martin swimming against each other. Florence, highly motivated by a surprise visit from her brother, was determined to get a medal and we didn't hold back in telling her that he had not travelled all the way from Scotland in a day in order to be disappointed. Unfortunately, for this race anyway, she didn't get a place. Kathryn, however, maintained her form and at the halfway mark she was in third place. Tiring though, as the race came to its end, she came in 5th, Florence 8th.

The women's 50m breaststroke later on in the morning saw Lizzie Allen in her penultimate race of the competition. A good swim and another PB but no place in the final. 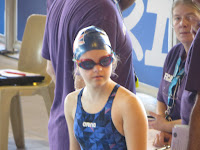 Lizzie was mistakenly credited with being GB's youngest swimmer, in fact, that title goes to Ellen but there's barely a month between them. Considering this is their first international competition they have both done brilliantly and am sure will be watched as some of our up and coming swimmers. With eight swims, seven golds and one bronze and being nominated overall top female mosaic swimmer Ellen is surely a rising star. 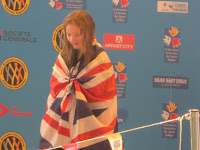 The 50m women's freestyle had three heats and eight swimmers from GB competing. It was the last chance for them to grasp a taste of glory. We were all hoping, most of all me, that Florence's surprise visitors would finally make her legs kick harder than usual. We were not to be disappointed both Caroline and Florence got into the afternoon's final. No celebratory last lunch for those two then, rest and with luck, a good sleep would go a long way to helping ensure success. 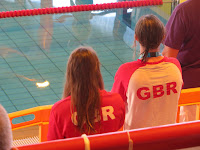 We had reached our final afternoon of racing. We had 32 medals in our bag. We wanted to make it a round 40 and had every possibility of doing so. But, our swimmers were all tired. The previous four days of competing had taken it out of them and it was beginning to show. Meltdowns were happening more and more frequently. Tracey and Terry and the coaches - now know as the ''dream team'' continued to keep the show on the ground though they were looking tired as well. 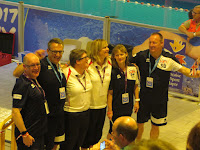 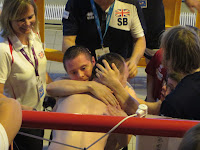 The 50m men's breaststroke saw a wonderful performance from Will Reed. From somewhere he found enough energy to swim like a true champion and bag the bronze medal. High emotions are an understatement. Will was unable to contain himself and was literally sobbing with happiness. His parents were not unmoved either. The swimmers congratulated him and tried to calm him but it was all too much and tears continued to come until well after he had received his medal. 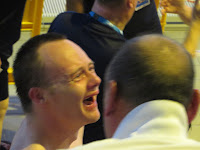 The final event of the competition was the coaches' relay. Sadly no team from Great Britain but that didn't make it less exciting. Teams from, Romania, France, Turkey, Spain, Portugal and Denmark were up against each other. Swimming like fury – massively competitive – each team wanted to win. But it was all done with great bonhomie. More water seemed to come off the pool than in previous races and more noise as well. The race went to Spain but to be honest it didn't matter who won it was just good fun.

Soon after there was the victory parade and it really was a victory. 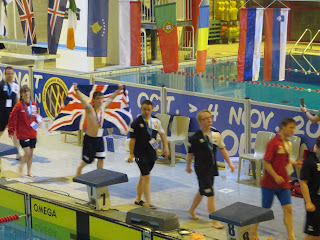 However cynical you are you just could not be in admiration of what had been achieved in the past four days. 30 countries, 130 athletes all with Down syndrome, performing high level, elite sport. A great moment for disability sport. A message to us all. Having a disability is absolutely no reason not to achieve in life, no reason not to have dreams and follow them, no reason not to win.

Bravo to everyone who swam – what a competition.!!